Albert Einstein Biography Books: Best you can ever get!

Get the most critically acclaimed and bestselling Albert Einstein biography books herein. A genius, who is still and will be remembered for his tremendous contribution to Physics. A scientist who makes other to love science. If you are curious enough, these books are going to make your desire fulfilled. Have a look:

1. Einstein: His Life and Universe 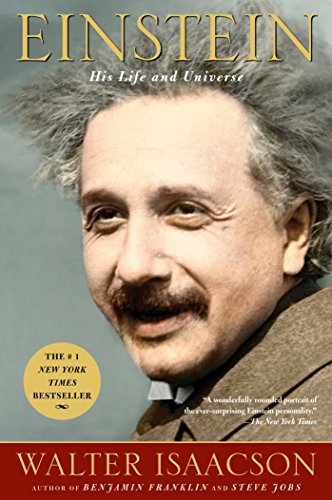 Albert Einstein, the epitome of intelligence, was one of the greatest scientists this world ever had. His 'Theory of Relativity' has changed the whole picture of Modern Physics. Every student of science, even students from other major educational field are well aware of his works. But what do we, the general people know about Einstein? We are not that interested in science but are definitely interested in world's one of the most talented person's life and struggles that he overcame. Once he was offered to be the President of Israel but he denied. This is how exciting his personal life is. Walter Isaacson (author of the bestselling biographies Benjamin Franklin and Kissinger) is a genuine storyteller. Albert Einstein's life was never so open to us before this book. This book is very special because it not only explains the technical aspects of his life's work but also provides an inside in it to his relationships with people and the politics that were happening in this period time.

The book is the first biography to tackle Einstein's enormous volume of personal correspondence that heretofore had been sealed from the public, and it's hard to imagine another book that could do such a richly textured and complicated life as Einstein's the same thoughtful justice. Isaacson is a master of the form and this latest opus is at once arresting and wonderfully revelatory. --Anne Bartholomew

2. Who Was Albert Einstein? 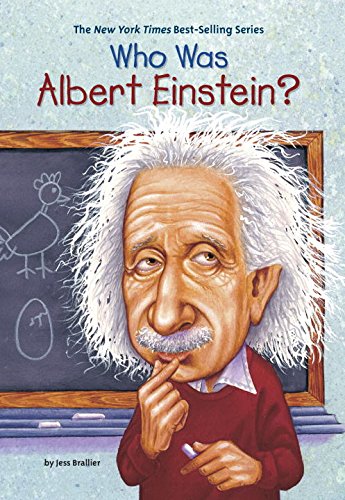 Kids love the Who Was series. They are great at making non-fiction, biographical books targeting to the younger readers. And this time it is Who Was Albert Einstein!

A great scientist who was funloving, even crazy yet super talented and hardworking. A perfect character of interest for those young readers who are a bit curious about science.

How much do kids really know about Noble winner Albert Einstein besides the funny hair and genius label? For instance, do they know that he was expelled from school as a kid? He never gave up and kept learning new things. Here's the story of Albert Einstein's life, told in a fun, engaging way that clearly explores the world he lived in and changed.

3. On a Beam of Light: A Story of Albert Einstein 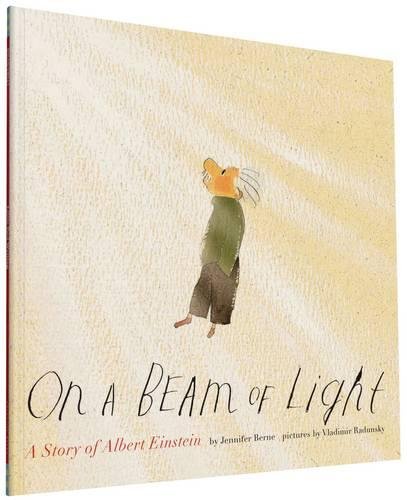 An awakening of the senses and a fascinating read!

Did you know Albert Einstein hated socks? He liked to wear same clothes every day! He enjoyed violin. And there are so many unconventional things about his life. Though this book is written for the young readers, adults will definitely like to know silly facts about Einstein too.

An amazing way to bring the life and work of Albert Einstein alive to children. What a perfect introduction to the young reader about the famous physicist who never stopped questioning the world around him. The whimsical illustrations illuminate each page, and it shines a light on the underlying message the story shares about the value of the imagination and how that should be nourished and not crushed.

4. I am Albert Einstein (Ordinary People Change the World) 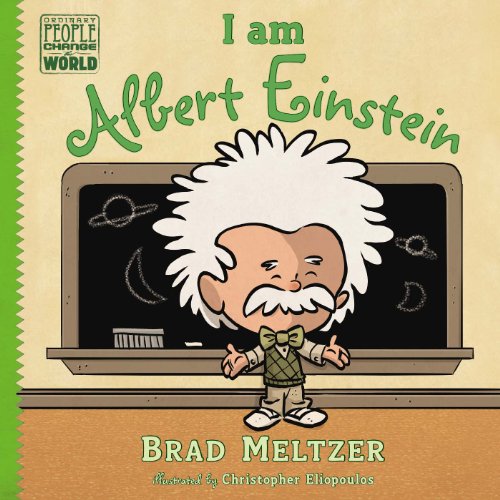 If you have an exam knocking at the door and you have to study 'Theory of Relativity' and other diverse works of Albert Einstein then this book is not for you! Instead, if you want to familiarize your kid with a comprehensive knowledge of Albert Einstein then you can go grab a copy of this book 'I am Albert Einstein'. It's a kid-friendly biography that focuses on the importance of curiosity, independent thinking, and creativity. The author manages to convey the spirit of Albert Einstein in only a few words with amazing complementary illustrations of the story. Just be prepared for a lot of questions, and deep conversation with your kid!

We can all be heroes - that’s the inspiring message of this New York Times Bestselling biography book by historian and author Brad Meltzer.

5. Albert Einstein and Relativity for Kids: His Life and Ideas with 21 Activities and Thought Experiments (For Kids series) 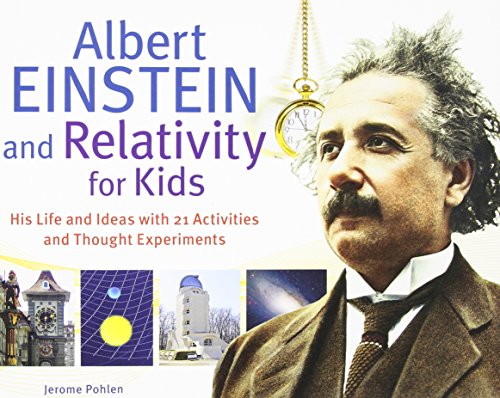 A book that adults can enjoy but actually a publication for kids. The book goes on to tell more about Einstein's life and influences with some of his quotes printed off to the side. The layout of the book is set up nicely with an excellent flow of history from beginning to end. Best known for his general theory of relativity and the famous equation linking mass and energy, E = mc², Albert Einstein had a lasting impact on the world of science, the extent of which is illuminated—along with his fascinating life and unique personality—in this lively history.

In addition to learning all about Einstein’s important contributions to science, from proving the existence and size of atoms and launching the field of quantum mechanics to creating models of the universe that led to the discovery of black holes and the big bang theory, young physicists will participate in activities and thought experiments to bring his theories and ideas to life. Such activities include using dominoes to model a nuclear chain reaction, replicating the expanding universe in a microwave oven, creating blue skies and red sunsets in a soda bottle, and calculating the speed of light using a melted chocolate bar. Suggestions for further study, a timeline, and sidebars on the work of other physicists of the day make this an incredibly accessible resource for inquisitive children.

6. Albert Einstein: The Life of a Genius 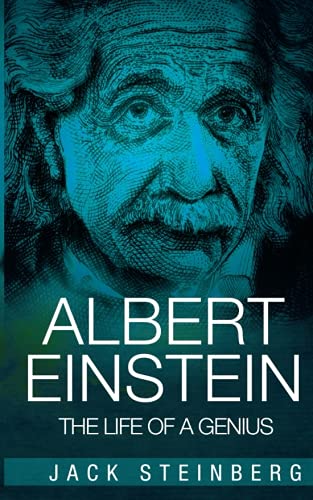 Albert Einstein: Life of a Genius When it comes to scientists that have made their mark in the world, then none are perhaps more famous than Albert Einstein. Students around the world are taught his theories and equations with E=mc2 undoubtedly being the most famous. However, there was more to this man than simply being a genius or the original prototype of the mad professor. Instead, this was a man that was dedicated to not only his profession but also the concept of pacifism, something that most people are unaware of.

Albert Einstein went from a late developing child to running away from school to almost failing university and instead turned himself into one of the greatest minds that the world has ever seen. This is his story, a story of how a child taught himself calculus and geometry and was then not afraid to challenge concepts of how the world worked that had been unchanged for centuries. This was a man who stood up for what he believed in even when the world appeared to be against him. The story of Albert Einstein is about more than just mathematical equations. The story is about a man who beat the odds and became world famous in the unlikely world of physics and the universe. 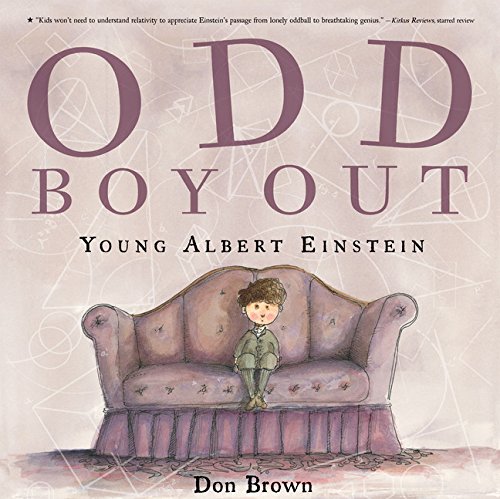 Author: Don Brown
Published at: 16/06/2008
ISBN: 054701435X
When he was born in 1879, Albert was a peculiarly fat baby with an unusually big and misshaped head. When he was older, he hit his sister, frustrated his teachers, and had few friends. But Albert’s strange childhood also included his brilliant capacity for puzzles and problem solving: the mystery of a compass’s swirling needle, the intricacies of Mozart’s music, the secrets of geometry—set his mind spinning with ideas. In fact, Albert Einstein’s ideas were destined to change the way we know and understand the world and our place in the universe.
In spare, precise text filled with graceful detail and accompanied by sometimes humorous, sometimes lonely portraits, Don Brown introduces us to the less than magnificent beginnings of an odd boy out. The result is a tender rendering of the adventures of growing up for one of the most important thinkers of the twentieth century.
This book exemplifies the uncertainties and lack of confidence that many young children feel about themselves. Yet, this child felt these inadequacies in his growing-up years and evolved into one of the foremost geniuses of our society. This book can offer hope for both children and their parents: the uncertainties of the early years does not predict what latent talents could later emerge. I state this unequivocally as a private practice psychotherapist and psychoanalyst for almost 40 years. Read this book to your children!
View Book 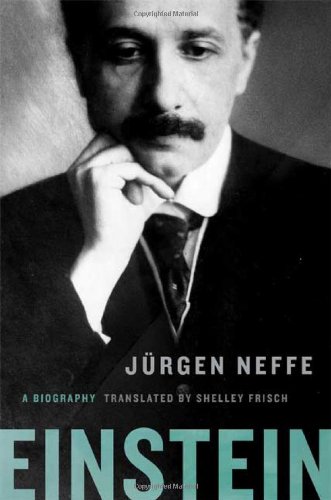 Author: Jürgen Neffe
Published at: 17/04/2007
ISBN: 0374146640
Noble laureate physicist Albert Einstein was born in Ulm, Germany, in 1879. Being a Jewish, he had to leave Germany in March 1933 as a result of the uprising of anti-Semitic Nazi activity by Adolf Hitler. And he never returned to Germany. Albert Einstein is famous for his 'Theory of Relativity' and has made enormous contributions to quantum mechanics and cosmology. Since his departure, he was in the center of Garmany's attention. So Einstein: A Biography, written in German, authored by German, was a massive hit throughout Germany.

Much of Einstein's life is shrouded in legend. From popular images and advertisements to various works of theater and fiction, he has come to signify so many things. In Einstein: A Biography, Jürgen Neffe presents a clear and probing portrait of the man behind the myth. Unearthing new documents, including a series of previously unknown letters from Einstein to his sons, which shed new light on his role as a father, Neffe paints a rich portrait of the tumultuous years in which Einstein lived and worked. And with a background in the sciences, he describes and contextualizes Einstein's enormous contributions to our scientific legacy.
View Book

9. Subtle Is the Lord: The Science and the Life of Albert Einstein 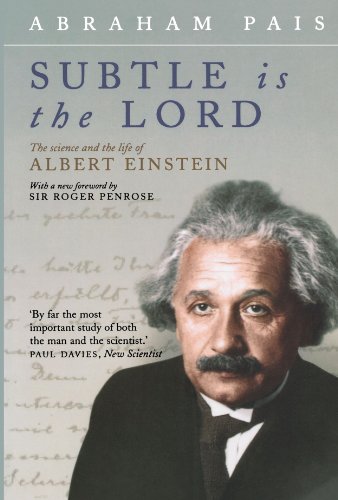 2005 has been designated "World Year of Physics" to celebrate the publication of Einstein's Theory of Relativity one hundred years ago. In commemoration of this landmark anniversary, Oxford University Press brings Abraham Pais' major work on Einstein's life and work to a whole new generation of readers.

It's a blessing to us that the author himself is a physicist and was a friend of Albert Einstein at Institute of Advanced Studies at Princeton. Abraham Pais has had complete access to the Einstein Archives and the invaluable guidance of the late Helen Dukas--formerly Einstein's private secretary.

This is a pure scientific biography. Only about 20% of the book is a non-technical biography, the rest being a very technical discussion of Einstein's physics, the prior work that influenced it, and its impact. Those who really love physics should go through this book. Here, they will be able to get a close knowledge of  Albert Einstein's works. 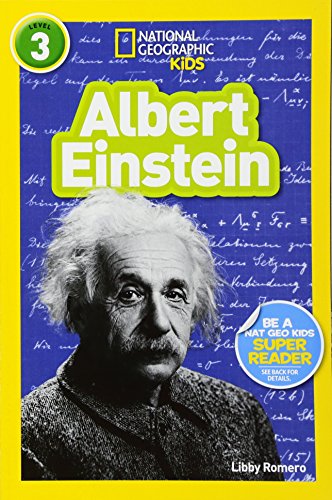 Author: Libby Romero
Published at: 13/09/2016
ISBN: 1426325363
Explore one of the most recognized scientists in the world with this biography of physicist Albert Einstein. Kids will learn about his life, achievements, and the challenges he faced along the way. The level 3 text provides accessible, yet wide-ranging, information for independent young readers.
View Book


Thanks for reading this post. If you have any opinion don't hesitate to comment here. Also please subscribe our newsletter to get more updates.
Tags: Scientists